The Most Important Chart (Phenomenon) in all of the Social Sciences

By now, regular readers of Faith and Family Findings are familiar with the data on family structure and its impact on everything important to a functioning society.  On every outcome measured, for adults and children, those in an intact family do best on all the positive outcomes we desire for ourselves and our children (education, income, savings, health, longevity, happiness, sexual enjoyment, intergenerational support) and have the least incidence of all the negatives we hope never afflict our children (crime, addictions, abuse both physical and sexual, poverty, illiteracy, exclusion, ill health, unhappiness, mental illness, lack of sexual fulfillment).

Thus family structure is exceedingly important to society and a return to intact marriage is a sine qua non for a nation or for families set on rebuilding themselves.

Given that, consider the implications of the following chart on the intactness of marriage at the end of the first five years of marriage: 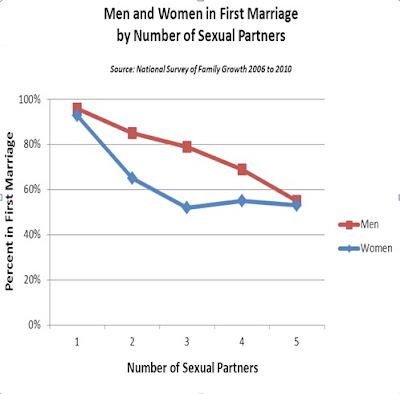 What this chart shows is the probability of intactness of family after the first five years of marriage-- given the number of sexual partners of the spouses have had in their lifetime. Using rounded numbers:  95% of those who are monogamous, that is only one sexual partner in their life time ---i.e. only their spouse--95% are still in an intact marriage after the first five years. But for the woman (national average) who has had one extra sexual partner other than her husband (almost always prior to marriage) the percent drops to 62% and with two extra partners it drops almost to 50%.  Thereafter it plateaus.  For men it takes five sexual partners to reach the same level of breakup.

When I first saw this phenomenon in the 1995 data (the above is 2006-2010 data) my immediate reaction was “Those Mediterranean cultures that had chaperoning during courtship knew something about human nature, family life and intergenerational stability.” They ensured Mediterranean family was on the three-love diet.

Chastity and monogamy are foundational to the intact married family, and thus to the prosperity and success of a nation.  Hence my conclusion that this chart is the most important chart in all of the social sciences.

A culture of monogamy is critical to a thriving nation or a thriving culture.

Thus the cultivation of chastity is central to a robust nation and a robust culture.  Chastity is an old term but now out of favor even among Christians, given the impact of political correctness i.e. cultural Marxism. However it is the accurate label for the virtue or strength behind the data.

Though the above chart is purely correlational – it is demographically descriptive of America, of what is happening between our couples who get married.  One chart cannot prove chastity is causative (go to Teachman and others to tease that out) but it sure indicates where causal strength (or weakness) can be found.